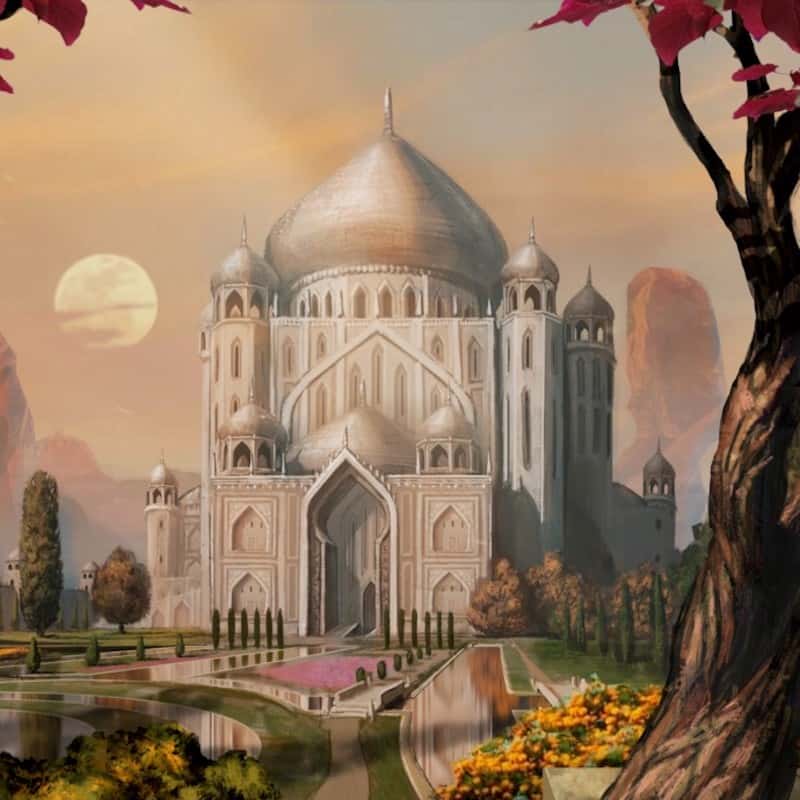 Known as the Jewel of Manadia, Ankrabad is one of the most wondrous settlements in the entire universe. Surrounded by nothing but desert, its population is heavily dependent on the yields gathered from within the large and protected Palace Oasis in the center of the city. Whatever else is needed is procured via trade — a task that for Ankrabad is much easier to achieve than for other settlements, considering that an ether portal exists close by.

The foundation of Ankrabad dates back more than four hundred years and is heavily linked to the first Human settlers finding their way to Manadia. Threatened by the newcomers, the native Gniwers attacked the Humans again and again until eventually, peace was negotiated. Slowly building what today is a fruitful partnership, the Gniwers helped the Humans relocate to the large oasis that eventually would become one of the most vital parts of Ankrabad.

Its beautiful architecture, the nearby ether portal and the heavy focus on trading in general are all reasons why Ankrabad attracts so many visitors on a regular basis. As a result, it boasts one of the largest marketplaces in the entire universe. Many exotic and valuable goods are traded exclusively here because criminal elements are so rare, and the exposure to travellers from all over is so high.

Criminals do very well exist within the walls of Ankrabad but compared to many other cities, there is little to be concerned about. The Laws of the Desert have always been fair but strict. The worst punishment in Ankrabad means three days without water, crucified under the burning Twin Suns. For most, it’s a sure death sentence that scares off most, keeping them on the right side of the law.

Ankrabad is mostly populated by Humans and a few scattered Gniwer communities. But as everywhere else in the universe, it isn’t unknown to come across individual Rhultaks or Narus. Since its foundation hundreds of years ago, the city has been governed by the Alvordis — one of Ankrabads founding families. While the Alvordis do live a secluded life inside the palace — located in the center of the oasis — they remain well-liked, especially due to their responsible and fair distribution of yields…