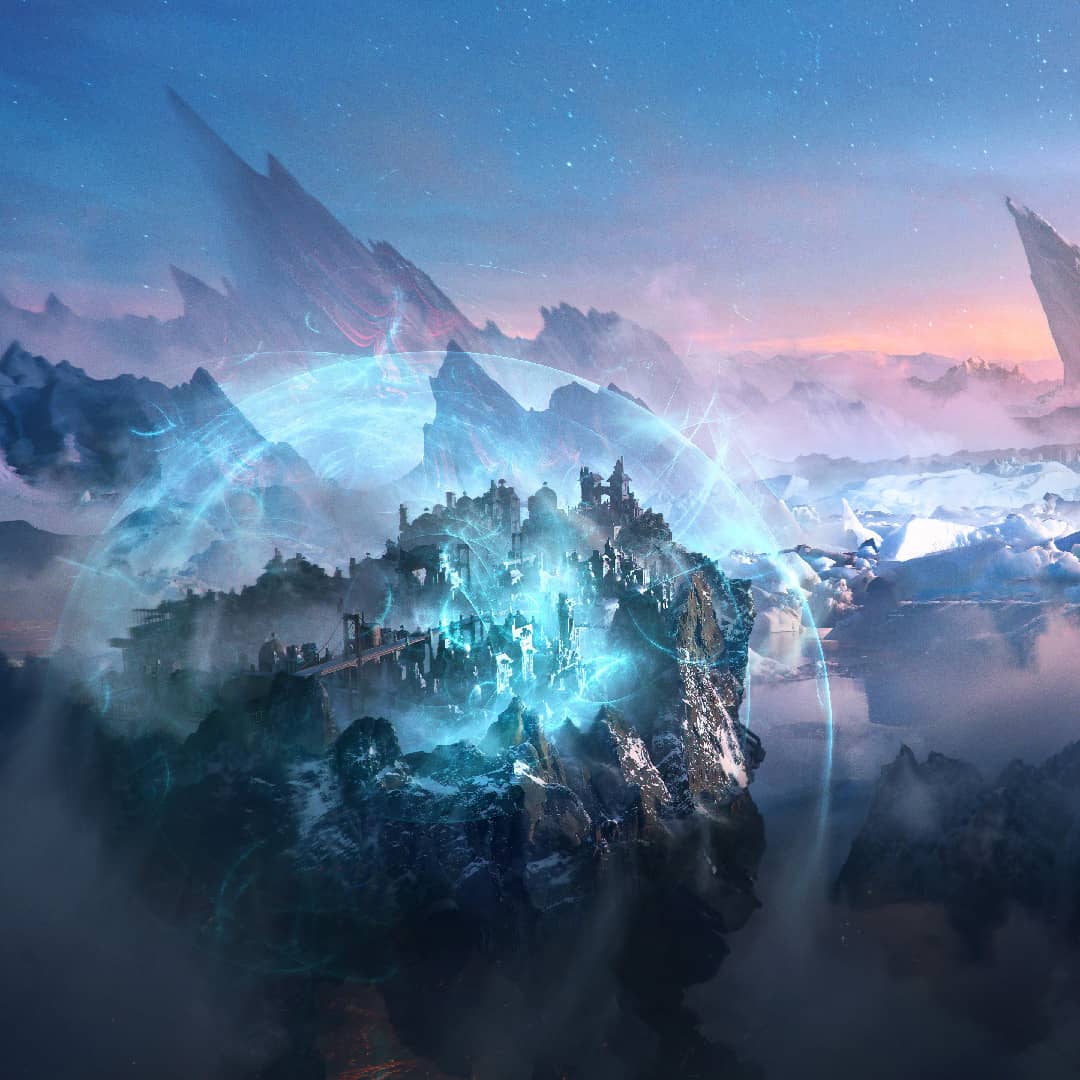 Though Manadia is known to be hot and arid, constantly heated by it’s twin suns, most people are not aware of what happens on its South pole. With the world revolving around the two suns in a particular way, this part of the world only ever sees them once every fifty rotations around the suns for three full days.

It is an area with a lot of volcanic activity and when the suns hit, the rapid heating of the crusts results in an explosive event this brings up a lot of rare metals, most of which can only be found on Manadia.

When the three days end and the light blinks out, extreme cold takes hold, rapidly cooling off the molten lava and creating weird black glass tree-like structures. With the ground revitalized with riches and minerals, a life cycle begins which is unique across the worlds.

Here the mobile mining-city Arliterum is found, built by some of the most ingenious Gniwer engineers known to their kind. Utilizing the sulphur that bubbles up during what they dubbed “The Rapture”, a play of words on the rupturing of the ground surrounding the most active volcanoes, the city engines are fueled to move around, recycle water and heat up it’s inhabitants. Everybody on Arliterum is there to work and as such they all share in part of the revenue that is made every cycle. Due to the harsh conditions and the need for everyone to pitch in wholeheartedly, pregnancy is not allowed and will result in immediate removal.

Regular transports to and from Ankrabad ensure enough resources are on board to keep everything running and to maintain a direct line of communication with the Alvordis, who benefit greatly from this cooperation. It is also a good way to get rid of difficult elements on Arliterum and to get in fresh recruits if necessary.

Though such a wild cycle would make it seem as if no life could be sustained here, the area where Arliterum travels through is teeming with it. Creatures that have adapted to extreme heat and cold roam the black icy plains and large patches of colorful pumpkin like fruits grow everywhere. They are edible, however, due to their adaptation to the frost, they developed a type of toxin to stop the juices within the plant from freezing over. Eating too much of it will give you what the Arliterumians call “Frost Mouth”, a numb sensation that will leave you drooling for several days. It does however help with not freezing when venturing outside and the toxin is therefore carefully extracted and used for everything and everyone that is exposed to the cold. It is also one of the more well known exports from Arliterum that is affordable to the masses as antifreeze.

There is no real weather system other than that it is cold. Enough ash and smoke is spewed into the atmosphere in three days that even close to the next Rapture, snow that falls will more resemble ash then actual snow. This ashy snow is a very welcome hiding spot for predatory animals. They will gather as much of it as they can and hide within. Once prey passes, the predator jumps out from the snow, almost sure to surprise it’s prey.

To gain access to Arliterum one needs to either be a lauded Gniwer engineer with shining recommendations, or one must be willing to go through a lengthy selection process and high fees. The Gniwers Mining foundation claims this is for the safety of all passengers on the travelling city, but history teaches that the motive for this is rooted in maintaining the mining monopoly of what is often referred to as “The Golden Tundra”. Regardless of the reason, once you set foot on Arliterum, you can only return after one Rapture cycle. Many families have sacrificed a lesser son or daughter to get at least part of these riches for their family and given the astronomical sums of money to be earned every cycle, they will probably continue to do so as long as Arliterum exists.

A special thanks to TotsOfTate | Polemos as winner of the Lore Giveaway: Location