A Deal With The Devil

Baros — Lord of Death, Bestower of Wealth, Master of Crafts

Laurentine watched with tearful eyes as Chimaine stomped away from her, pushing past the now silent crowd.

“Stop, please! I am sorry!” she yelled, her voice choking. Several people in the crowd turned away from the raw pain that flashed on her face; others shook their heads in disgust.

Laurentine did not see any of it. Through a blur of tears, she stumbled two steps after Chimaine and then dropped to her knees, burying her face in her blood-crusted hands. Blood from Chimaine’s last living family member, who she had hunted down and murdered in cold blood. Her sobs turned into cries, and her cries turned into wailing until she was ugly-crying her heart out, mascara dripping down her porcelain cheeks and snot bubbling and dripping over her lips that had hints of smeared red lipstick on them.

She knew exactly where it went wrong. A month ago, she met a slender young male with eyes so violet that she had to look away. He promised her that she would become the greatest hunter alive if she offered him her virginity. Jealous of Chimaine’s prowess and speed and all the fame that came with it, Laurentine gladly accepted his offer.

As he unloaded his seed in her, it began to burn and spread through her body, settling into her as if rewriting the very essence of her being. From that moment on, she was an absolute beast. Everything about her became better, her hearing, her smell, her eyesight, and according to Chimaine, even her lovemaking.

It did not take long until Laurentine started to take on hunting jobs by herself. When she got the call to take down a fellow bounty hunter, she did not hesitate one bit. She was going to take this bastard down for not delivering on his promises and letting his quarry get away. It was her holy duty to protect the guild’s honor and prestige, and she made sure the customer, a young boy with piercing violet eyes that reminded her of the man who gave her her powers, knew this before she confirmed the hit.

The man pleaded with her, tried to sell her some bullshit on how they were family, but she did not listen. In her rage, she beat him to death in the streets of Dranau with her bare hands, only getting pulled from her blood-lust-fueled butchery at the screams and sobs of Chimaine. Apparently, this man was her twin brother, and he was set up by an unknown party.

Oh, she would never forget the hate that had flared up in the face of the woman she loved so much, hate directed at her for killing the only person that validated that she was not alone in life.

As Laurentine poured out her tears until the only thing coming out of her was a faint breathy moan, mist covered the square upon which she now sat, fully abandoned by the crowd that so eagerly mopped up the drama that was unfolding before.

“Such a beautiful prize,” a voice spoke, sounding like a butcher’s saw going through dried bones. A tall figure with a black hood, seemingly floating, stopped in front of Laurentine. Within the hood, she could discern two luminescent violet eyes. The same eyes of the young man who deflowered her for power, the same eyes of the pale young boy that delivered her last assignment, the eyes of Death itself.

“So many delicious little deaths you have given me.”

Laurentine wiped her nose and raised an eyebrow. “What do you mean? I rarely kill anyone, only…” her voice lost power as she weakly waved in the direction of where the body of Chimaine’s brother must lay in a puddle of congealed blood.

The figure laughed a throaty laugh and slapped their thighs. “Such a linear mindset you mortals have. You have given me so much, I will give you understanding in return.” Throwing back its hood, the figure uncovered the head of a handsome man. He was not handsome like the young men that were being paraded around by the madams in the Red District. Still, he had a maturity about him that made him intoxicatingly attractive. Sleek black hair, combed to perfection, adorned his pale face, and he wore a monocle engraved with all kinds of icons that Laurentine felt she should recognize. Flashing a pearly white smile, he spoke again.

“You see, Death is not just the ending of life. It is the end of everything that is precious. I have enjoyed the Death of your innocence, your humility, your friendships and…the tastiest of all, your Love.” When he spoke the last words, he licked his lips with a pitch black tongue in which Laurentine thought she could see the stars.

She started trembling. “Please… can you help me? I will give you everything, anything I can give you. PLEASE!!” Laurentine screamed the last words, lying on the floor now, her hands clawing the sand in front of her.

“Oh darling,” the man said as he put on his hood and turned to walk away. “I already took everything that you have.” The mist pulled away in an instant, and the man disappeared in an instant, but a soft, menacing cackle hung in the air.

Laurentine started screaming and did not stop for a long while, even after she drove her dagger through her eye–socket. 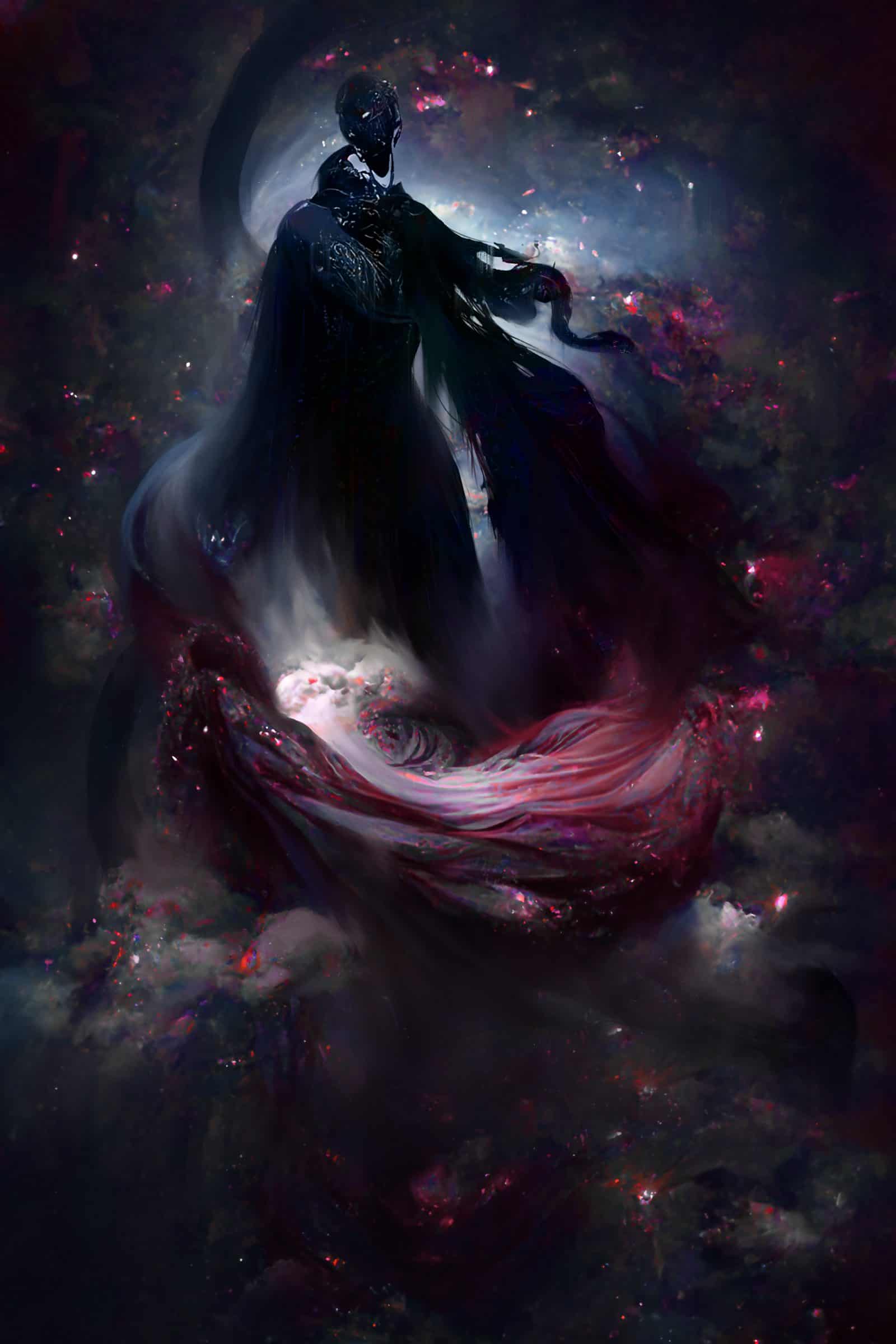