A Hunting Party of One

Ferana — Mistress of the Hunt, Deity of Love and Nature’s Blessed

Yond’ro could no longer lift his arms. He had been swinging his axe all day and it was getting late. Looking around him he saw that all the others went home.

But Yond’ro did not wish to go home. He did not wish to submit himself to the humiliation of being paraded and showcased as a trophy or to be borrowed to others as a favor, forced to do whatever was requested for the pleasure of the women holding his reigns.

He had thought of running away quite often, but that would make him an improper husband and shame his family. Life as a Seeker also seemed very unappealing to him.

It started to snow.

Very slowly and unnoticeable, little tufts of puffed up ice were twirling down, as if someone pulled out the hairs of a goat and let them fall one by one. Yond’ro loved snow, he always had. Ever since he was a kid it gave him a feeling of serenity and his memories of walking through the woods with his fathers in the absolute quietness that only existed on a morning when snow had fallen, were some of his fondest memories.

A twig snapping to his right, brought Yond’ro back from his daydreaming. It was getting dark already and being outside alone in these parts of the woods was usually ill-advised. Easily adjusting to the lack of light, he peered through the trees around him.

A huge dark shadow that looked like… A wolf? Yond’ro lowered his axe hesitantly but stayed alert. Wolves were revered by the Naru as they were a resemblance of Ferana, but he did not know anyone that actually ever saw one. Of course the women boasted about seeing numerous wolves on their hunts, laying with them and feeding on the same prey, but he didn’t really believe them.

The huge shadow disappeared in the trees, but he could still discern some movement now coming towards him. Once close enough he started blinking to make sure that what he saw was not just a snow ghost. Walking towards him was a tall, strong female. She had Naru skin, but her body was shaped like some of the lewd carvings that were traded amongst the men of the women of other races. Long legs that seemed to go on forever, supported a slender, almost girlish frame. She had short blue-green hair and glowing golden eyes like that of a wolf and her whole body seemed to be on the edge of bursting into violence.

Realizing she was naked, he quickly averted his eyes and started taking off his snow mantle to offer to her. Prostrating himself in the old ways some of the women that had used him in the past had shown him, he threw the mantle in front of him, hastily mumbling apologies for laying eyes upon her without her permission.

Nothing happened for a while and he dared to look up to see where the woman had gone. Standing on the robe she was looking down at him, her head tilted to the side as if waiting for him to answer a question. He quickly looked down again, waiting for her to speak.

Instead of saying anything, he felt her kneeling in front of him, the warmth of her body radiating around her as if she was on fire. She smelled… she smelled of spiced mulled wine and fresh sheets and like the morning after a long day of hard work. No, she smells of freedom, Yond’ro thought to himself, inhaling her scent deeply.

Sensing that she stood over him, her legs next to his head, he felt her sniffing him like an animal and occasionally licking him. It reminded him of the creatures that his wife had told him about that the Humans kept in their homes. Hogs.. no dogs. Dizzy on her smell, Yond’ro let her investigate him, not daring to move an inch and trigger the promise of carnage that she emanated.

After she had fully turned around, now sitting on his back, he felt her breath drawing close to his face and neck. The woman stopped and was still so long that Yond’ro opened his eyes to see what was happening. His eyes were open long enough for him to see that the woman was staring at his neck, mouth wide-opened, displaying large and sharp teeth unlike he had ever seen. He panicked and decided it was time to get up, but the woman, now straddling him, slammed down her hips and pinned him to the ground.

Yond’ro struggled hard with his considerable strength, but she held him down as if he was a baby goat. The woman made an approving sound and by the slickness on his back he could tell she was getting aroused by him fighting. Growling he fought to get his arms underneath him to push himself off the ground, surprised when he succeeded.

With a roar he jumped to his feet and whipped around to face the woman.

But… there was nobody there. Frantically he searched around trying to find in which direction she went. The snow had increased and it was turning out to be a full-fledged snow storm. Suddenly he felt a long wet tongue licking his neck and a sharp pain bloomed on his shoulders. As he turned around, he saw the woman standing right next to him, her presence now fully hidden, as she was licking his blood off the sharp claws in which her fingers ended. She winked and disappeared, leaving behind nothing but a playful laughter echoing in the snow.

Was this a test of sorts?

Throughout Yond’ro’s life, nobody ever believed him when he told them about what had happened. It came to the point that even he thought that he must have fallen and hit his head, conjuring up a fantasy born out of despair and the want for freedom. But every now and then, he would dream about the woman with the golden eyes. Vivid dreams of hunting fighting and fucking filled his nights, and when he woke up, he would find that the scar on his back became a fresh wound again. It was as if he was reminded that he was marked by the Goddess herself. 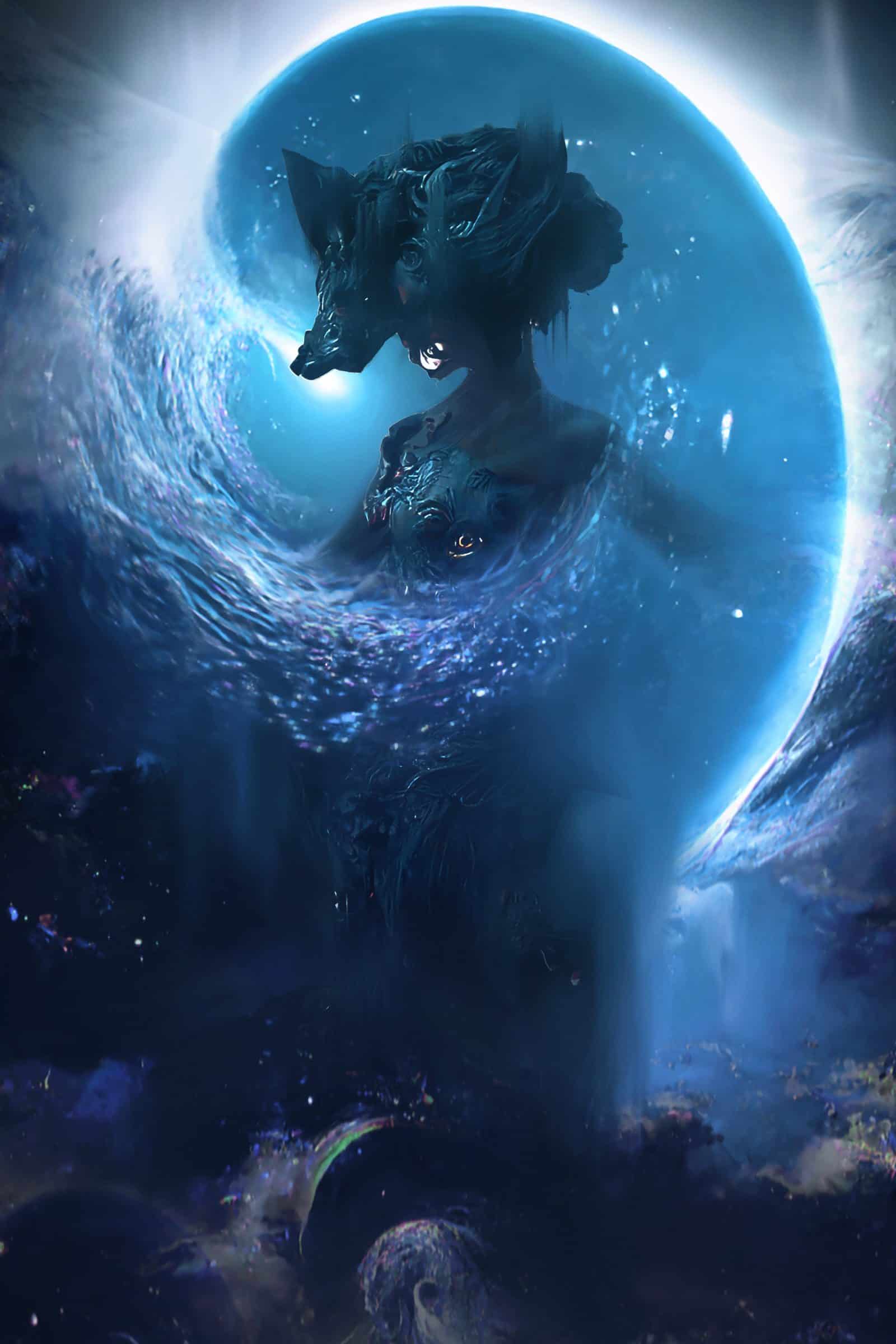