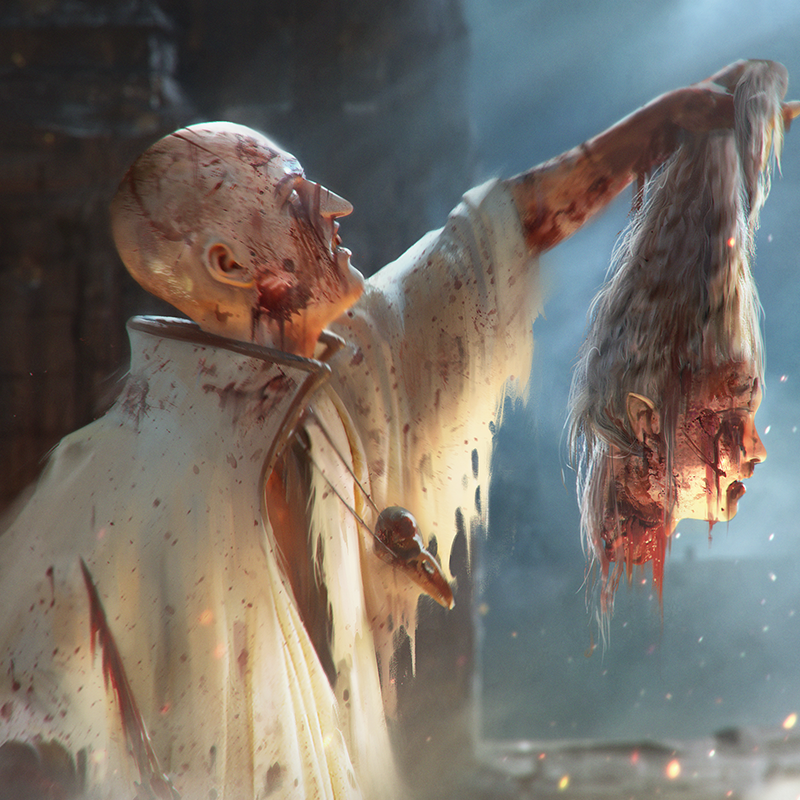 Written by His Holiness, Patriarch Ulf the Bloody - a letter to his Congregation.

At the beginning of creation, when the Almighty was called away, the Holy Essences were captured and enslaved by the False Gods. With their cruel and filthy ways, they deceived the Holy Essences and beat them into submission, forcing them to do unspeakable things and wield their power for their own devices.

Worlds upon worlds were devastated by the False Gods who believed that they themselves would be able to take the place of the Almighty. And when four of the Holy Essences finally freed themselves from the claws of submission, they sent out their angels of death and decay, the Dhari, to hunt them down and bind them, keeping them away from us, their beloved subjects.

Oh, how my heart wept when I found out the truth of it all. Flagellating myself for days on end as punishment for being a follower of the False Gods, I eventually succumbed to my wounds. My parents, my friends, and my family all tried to keep me from the truth and pull me back into their idolatry and debauchery.

In my dreams, when I was recovering, the Essence of Mind herself spoke to me and showed me the way to forgiveness. I was given a holy gospel to share with you, my kindred souls, and pave the way for their second coming, where we will guide our brethren and rule the worlds as the Dhari once did.

“What is that way?” you may ask. “How do we seek forgiveness and be welcomed into the light?” Us Chosen are following a holy path, one that will deter only the weak of faith and faint of heart. We need to cut down all who do not wish to accept the Holy words that were given to me by the Essences. The Essences will not be satisfied until all of creation accepts them for who they really are - our True Gods.

But, this is still not our biggest sin. Across these worlds that we know, and on the ones hidden by the Dhari when they sought to take power from the Essences during the Long Night, the filthiest of all creatures roam. I am ashamed to say that within my own race, the Humans, I have witnessed these creatures be deified and put on pedestals, as they wield the power of the Essences as if they are Gods themselves.

You know of whom I speak. The Gifted, wielders of power that should not be used by mere mortals, but only by the Almighty or his conduits - the Holy Essences. Building their schools, their guilds, they seek to rule us and beat us into submission, putting a veil on our minds so we are unable to identify the truth! That THEY are missives of the Dhari and the False Gods seeking to lead us all astray!

My children, my family, my followers, hear me now! Go out and find these disgusting creatures and bring them before me to be judged. Strip their clothes from their bodies and do with them as you please, so they will know what it feels like to be powerless. Burn their skins so they will know the fear and the rage and the hurt that we feel, when we see them misusing the power of our True Gods, the Holy Essences.

Bring them before me so I can rip out their hearts; yes, let us feast on them as they have feasted on the hearts of innocents when they forced them into servitude.

Then, and only then, you might save yourself and those that you bring to the light. Only then can your soul be cleansed. With bowed heads and on both knees, we shall beg the Holy Essences for forgiveness and pray that they will grant it to us.

For we have been blind for far too long. Now you must throw off the veil that is darkening your eyes and prepare yourself to see.

My children, I am very much looking forward to seeing your efforts.

May the Essences guide your blades.