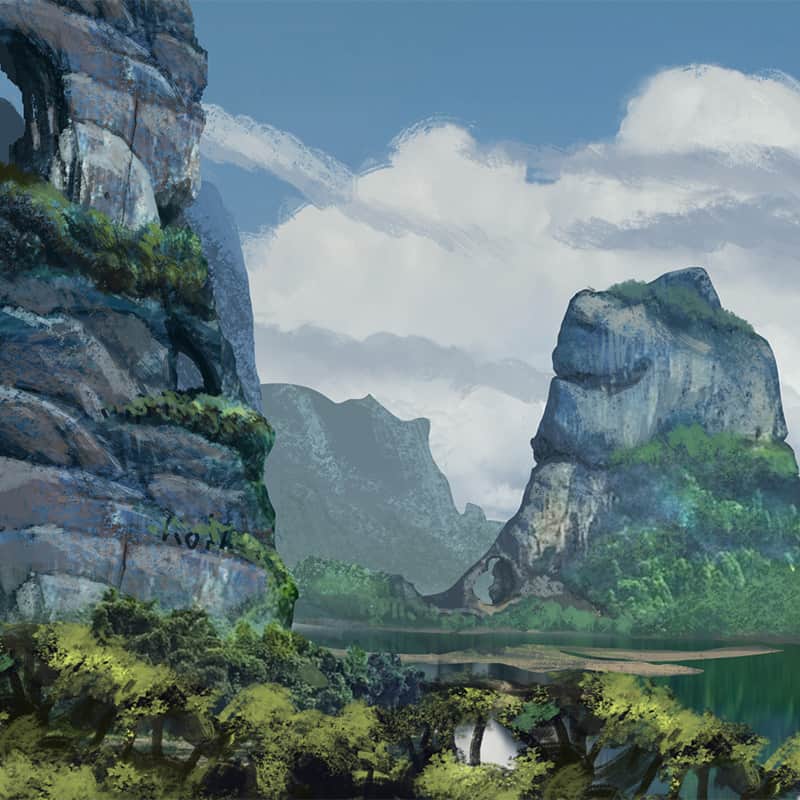 Whilst most people are aware that Khorgram is home to the magical Skybreakers, it is also known as the origin world of the Rhultak.

The world is covered in every known type of water body, some that are specific only to Khorgram, and so it is no surprise that the Rhultak developed technology to deal with it. Whether it were stormbreakers to keep out the stormy seas, long term solutions to build homes within the many lakes or landscape engineering to reroute rivers when needed, the Rhultak mastered it all.

Due to all the water, Khorgram has a wide variety of wildlife that adapted to water in one way or another and maintains a very sensitive eco-system. For that reason, everyone entering the planet through the ether portal is thoroughly searched and smuggling is considered to be one of the largest crimes, second only to hunting the magical Skybreakers.

The Rhultak live in clan based societies with no real ruling structure. When an issue arises, the chieftains and their elders would resolve the matter, and if the issue would span across multiple clan territories, they would simply include the chieftains and elders of all involved clans. Though it seems a very clear process, Rhultak rarely agreed on anything and regular altercations between the clans had resulted in deep-rooted feuds between several of them. This resulted in the Rhultak developing a keen understanding of warfare and weaponry, leading to the saying amongst generals and soldiers “to be ready as a Rhultak” before a battle was fought.

Within the territory of any clan, multiple villages could be found, but none large enough to be called cities even when a chieftain presided in that village.

Khorgram does however house a particularly large city, built on one of the largest lakes called Mengbilla, the Floating City. The city was once a small settlement founded by Humans seeking to learn about the Rhultak water engineering. After centuries however all races could be found within it’s borders, including a rather large number of Rhultak who decided to abandon their traditional lifestyle. Mengbilla is home to several universities and many leaders send their best and brightest to study there.

The Rhultak are a passionate people with a cuisine focused mostly on fish, but there is one specific dish that stands out on Khorgram that can be found in many different variations throughout all the known clans, regardless of where they live. It is a stir fry made with green moss and intestines of Marihuns, a large beetle-like creature that lives all across Khorgram, called “Battles Kiss”. The beetles are bred specifically for this and are fed particularly strong spirits from the day they hatch. Purists feel no spices should be added other than the juices from the Marihun itself, but all across Mengbilla the dish has been re-invented by cooks from all over the universe who spice them with whatever they brought with them from their own worlds.

Large libraries that are maintained by tributes from all clans guard the history of the Rhultak, who themselves do not live long and are keen to make sure they are able to transfer knowledge to later generations. One persistent story that can be found in Rhultak legends is that — beyond the Wild Sea and thus unknown to all — a vast kingdom ruled by an unknown race exists with such riches that even the wealth of the famous oasis of Ankrabad pales in comparison. This legend naturally caused many adventurers and a handful of fools to attempt to sail across the Wild Sea in an attempt to get a hand on these riches, only to be swallowed up by the unconquerable sea.