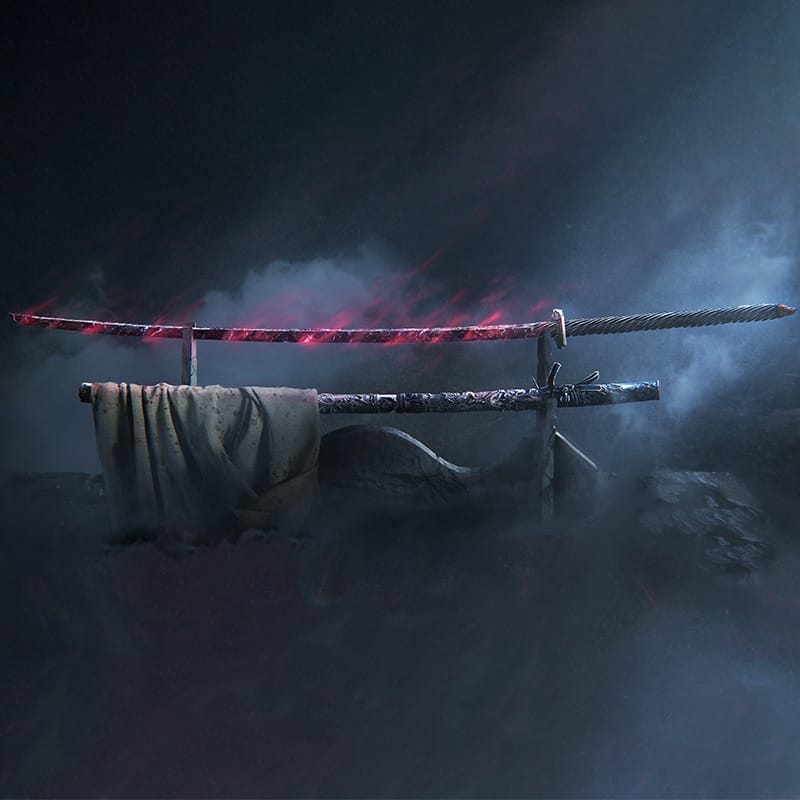 “Cypher… rage against the Gods, rage against creation. Free thyself from mortal coils and get drunk on conquering the heavens…” — Ancient Advertisement for ale from before The Long Night. Found on Durania.

With a blade of over 7-feet long, Cypher is one of the longest weapons of old that have been recorded. Though history records from before The Long Night are rare and widespread, historians across different worlds have found a mention of this particular weapon in a variety of artifacts.

The stories are very different, most likely due to cultural interpretation, but on a few topics all records agree on. Cypher was a nasty blade that seems to be connected to the mysterious Titans and to the Gods themselves.

On Manadia, the story goes that when the Gods created the Titans, Baros crafted a sword out of fear, hoping that he would be prepared to slay them, if he ever had to. Mixing Ethilium with molten steel, Death and the blood of a Titan, he forged a sentient blade that would never dull and could only hurt Titans; but the murder of the Titan made his blood boil, causing the blade to emanate such violent and murderous vibes that everyone touching it would go mad. Baros crafted a sheath of a piece of rock that he broke off from the Well, causing the first weakness that would later set free the essences. There is a lot of discussion on this version, and linguists have been reported to get physical translating this particular record.

The Naru, a people that have as much verbal history as recorded information share a specific story between the societies spread out on Limera. It tells the tale of a lone Titan seeking approval of the Gods. He traveled through the Ether realm and managed to find a nugget of solidified Ethilium. Using his own blood to draw out Light, he heated it and shaped it into a long curved blade; the sheath he made from his collarbone. Hopeful, he screamed out to Baros, whom he knew was a legendary craftsman. But Baros never appeared to him and so, angry and disappointed, the Titan drew the blade and took his own life, feeding his rage and hate for the Gods into it. When other of his Kin found him they were unable to withstand the evil influence of the sword and they wrapped it in a cloth that was soaked in Ethilium to dim its maddening whispers.

In Ankrabad, in one of the many libraries of the Alvordis, there are records describing the blade in detail, and many artists have tried to create a visible representation of it. Obviously, artists tend to deviate from the texts and add their own interpretations, but there is one anonymous artist, a purist from approximately 100 years after The Long Night, who made an accurate painting of Cypher.

His painting called “Cypher” depicts a 7-foot long blade with a slight curve. The hilt was onyx black while the material appeared to be rock, smoothed out and then sanded to give it a matte surface, adding to its menace. A wrap of silk cloth with a golden sheen was wrapped all along the blade, but at the hilt, a small sliver was visible that showed the blade. It was as black as the hilt but on the cutting edge, there was a red glow as if lightning viewed through a wine glass was captured within. On the floor lay a carved black scabbard depicting gruesome scenes.

Across the worlds, this painting is accepted as a true image of this weapon and thus the weapon’s name became Cypher. We might never find an answer to its existence, but with what little information we have about it, this could very well be one of the items that should remain lost in the past.

Special thanks to Revenge as winner of the Lore Giveaway: Weapon.