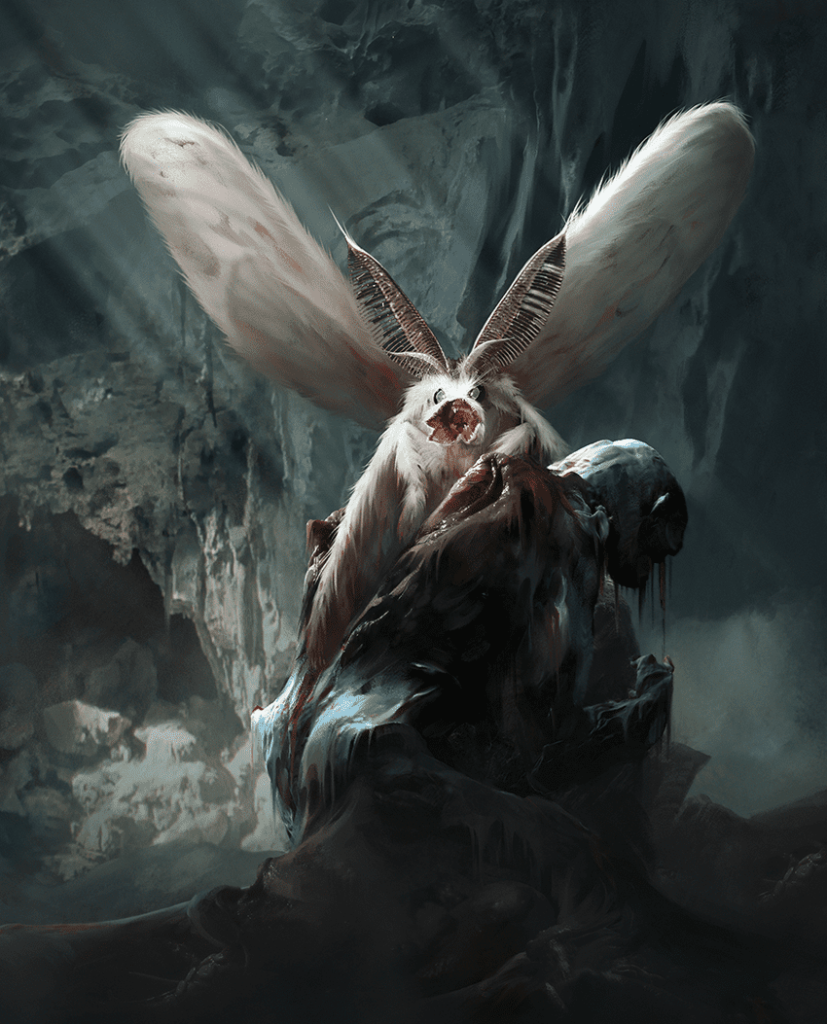 Though sighted on many known worlds, the home planet of the Phage Moth is unknown. Their furs are a wanted commodity for noblewomen, and ground carapaces of their larvae are used as aphrodisiacs in brothels all across the known universe.

The Rhultak, their homeworld Khorgram a perfect breeding ground for the Phage Moth, have faced this creature in the past. After eradicating them, they placed a ban on importing these creatures or items made of their corpses. History books still tell the tales of the devastation this plague left on the planet, and some historians fear that some eggs have survived the planet-wide purge. Hibernating, waiting to hatch and plunge the beautiful planet into chaos.

In their larvae stage, they are called Yartsa, and their appearance is similar to a tardigrade. Eggs laid in a cluster, the hatchlings eat the eggshells upon emerging and then start feasting on their slower siblings. With their primary hunger stilled, they drift in the water, mimicking death to avoid getting eaten.

This, however, is the only stage in their lifecycle they are truly vulnerable. Within hours, the consumed flesh of their brethren is used as fuel for poison glands. When this comes into contact with water, it envelops their bodies in a gel sack that is difficult for aquatic life to chew through. Gluing them to the Yartsa, it paralyzes and begins a slow, gruesome devouring.

Always hungry, they remain in this stage, gorging themselves until they have grown a thousand times their original size. Hunters on several worlds harvest this poison to aid them in their hunts. Some even say that if this poison is mixed in with ale, the consumer will enter a trance in which they are able to speak with the Gods themselves. There are, however, no known survivors to confirm this.

When the Yartsa approach maturity, they will swim towards the shore, using their six short paws to maneuver. There they will find a place where wildlife gathers to drink. The gel on their body melts, leaving their bodies covered in a soft sheen emitting a desirable smell to attract predators. As they are now the size of a small bird, the larvae can be swallowed whole.

Upon reaching the stomach, they extend their paws outwards and claws emerge, embedding them into the esophagus, and they send out nerve tendrils that grow towards the brainstem within a matter of hours. In full control of the predator’s body, the Yartsa guides the creature they control towards a cool and protected place, disconnects its limbs, and as a worm, starts eating the live flesh of its prey. Husks that were found and studied by scientists mention that all flesh was devoured, and even the bones sucked dry.

When the Yartsa is done, it falls into a deep sleep. Unlike other moth species, it does not have the ability to spin a cocoon but instead uses the carcass of its prey to grow into a grown Phage Moth.

Upon reaching their full size, the Phage Moth is born, bursting out of the skin of its prey. With fur all over its body and wings with a span of up to 1.5 meters wide, it comes across as innocent, cute even. As adults, they favor fruit and bark over meat as if to offset their gruesome voyage to adulthood.

At the rate Phage Moths reproduce, a planet will quickly see its ecosystem destroyed. When Phage Moths have weakened the ecosystem to a state where it is no longer able to sustain them, they will go hungry, and the ravenous hunger from their youth returns. At that point, they will start to swarm, attacking everything in sight.

As such, there is a standing order on all known planets for everyone to kill any Phage Moth that is encountered, regardless of social class, race or creed.

A special thanks to outback_stakehaus our Lore Giveaway winner: Creature