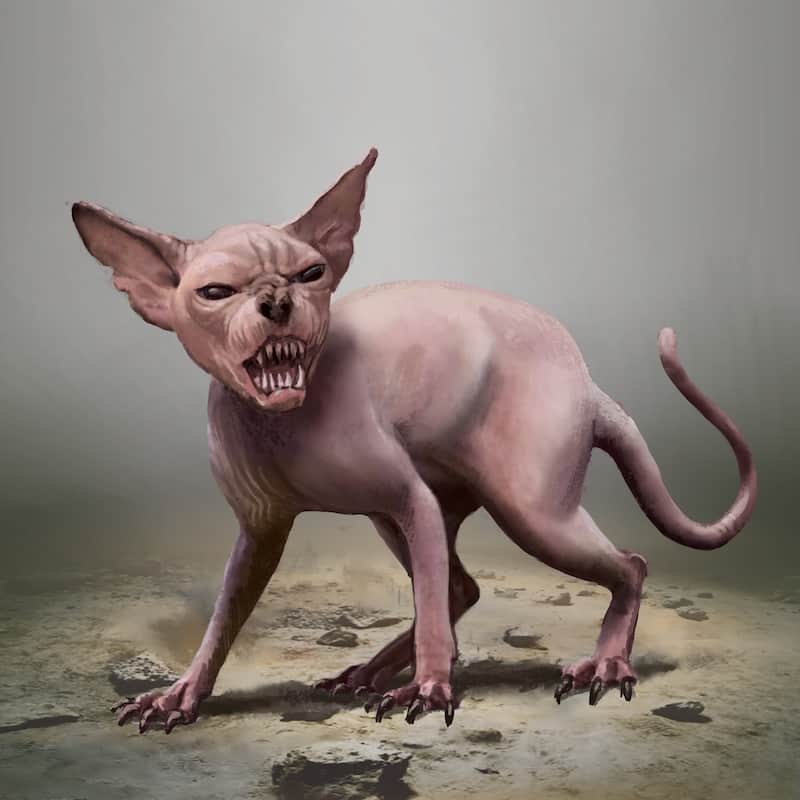 A plague on many worlds, these creatures are not only incredibly disgusting to look at, but they can also be quite dangerous when encountered. Most of the time, though, it requires a pack of them to represent an actual threat. Individual Skvirks – even two or three – are too cowardly on their own and tend to flee unless backed into a corner.

Skvirks are scavengers, and if their prey cannot be hunted and killed easily, they prefer to devour carrion found throughout their huge roaming grounds. While they usually avoid cities completely due to their cowardice nature, it does happen that individual Skvirks find their way close to smaller and more secluded settlements. You’ll often see them going through trash and sometimes even trying to dig up fresh corpses on graveyards.

When facing Skvirks, the most reasonable cause of action is often to appear as threatening and loud as possible in order to scare them off quickly. It is important, though, not to push them into a position where they cannot flee anymore. This only increases the chance of being attacked, something that should be avoided at all costs.

Cowardly as Skvirks are, they still represent a real threat when attacking someone. It is quite common that they carry harmful diseases, easily transmitted when bitten or scratched by one of these raging beasts. At times it does happen that an outbreak of Kepara – a highly contagious and deadly disease – decimates the Skvirks population on a particular world. But while this sounds good at first and all of the god’s children are immune, their livestock often is not, and devastating famines aren’t unheard of as a result of this.

The origin of Skvirks is unknown, but they have been roaming many worlds since before the Long Night. If lucky enough to not be killed or dying of a disease, Skvirks can actually live quite long, and there have been rumors that certain individual Skvirks – recognizable through particularly unique features – have lived for decades, so always be on the look-out and make sure to not be caught off-guard by some of these beasts…