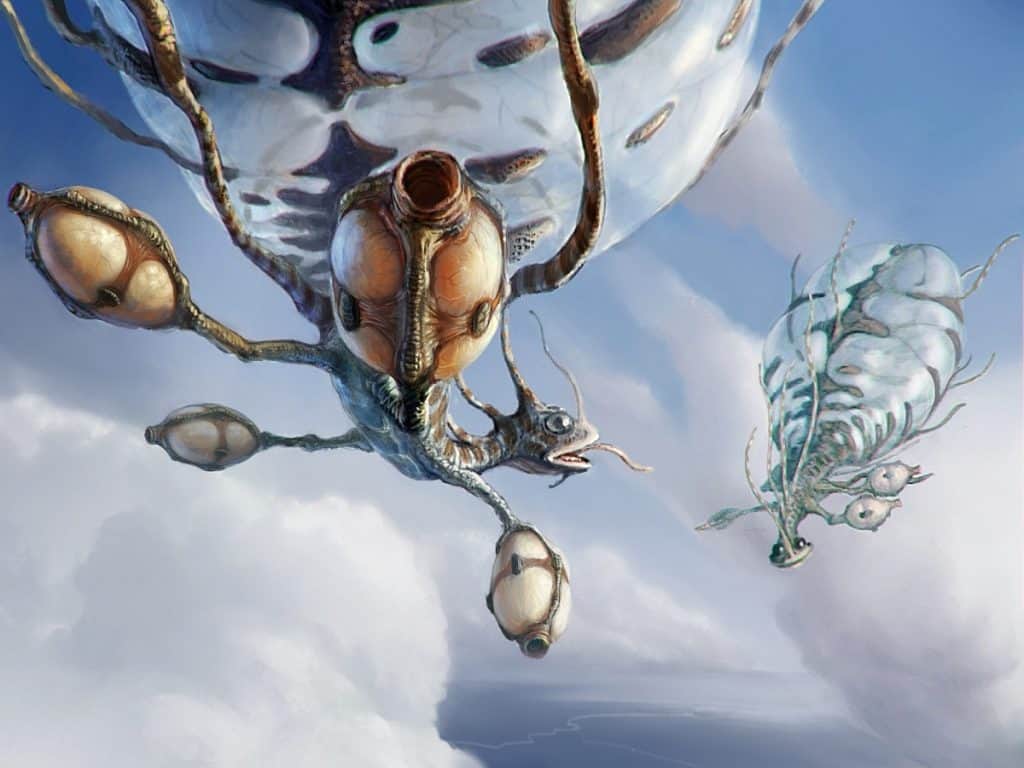 Native to the Rhultak origin world, Khorgram, Skybreakers are an incredible sight and certainly one of the more unique creatures in the universe. They are completely harmless and can be observed peacefully when encountered, but due to their physiology they can only be found in regions with a high concentration of water.

Many travellers visit Khorgram to study these marvelous creatures but rarely do so up close. Skybreakers are – despite rumours describing their navigation pouches as a delicatesse – a protected species and it doesn’t matter which Rhultak clan one would come across when breaking that law, the punishment would be swift and severe.

Skybreakers seem to have a positive impact on the air quality surrounding their habitats which has been one of the main reasons for an increased interest in them. Some people see them as a weapon against the ravaging hordes of Graacks that have started to invade multiple worlds since the Long Night. Graacks are vicious creatures releasing toxins into the air that are harmful for most other living things.

Especially in the last few decades, scholars from all over have been trying to solve the secrets of the Skybreakers in a desperate attempt to unlock something that could only be described as invaluable knowledge. Finding a way to replicate what the Skybreakers do to the air surrounding them could very well save entire worlds from becoming uninhabitable.

Fish and plants – caught with their tongues – are the only food sources Skybreakers seem to value and it is their unique digestive process that gives them the ability to rise up in the air. Contrary to many other species, Skybreakers do not digest their food right away; instead, it is stored in a specific part of their stomach, waiting to be processed.

In their regular form, these creatures can easily be mistaken for large snakes but when actively digesting, certain gases are produced and – if so desired – stored inside of them, continuously blowing up their bodies. Eventually floating through the air, Skybreakers then use their navigation pouches by forcefully releasing small amounts of gas which pushes them in whatever direction they want to fly…