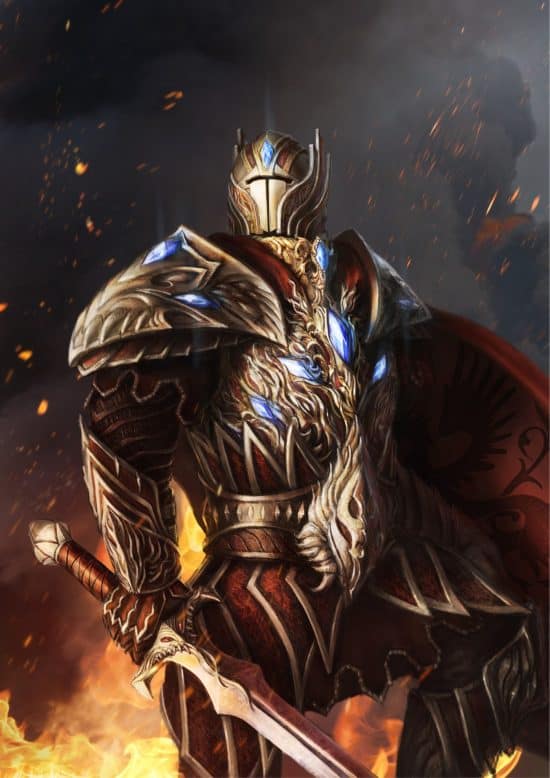 Storm – standing alone in the rainforest with his back towards the creature – took a deep breath; he could still feel the warm summer breeze touch his face, but all the pleasant smells were gone; replaced by the stench of death and decay.

It wasn’t a big surprise; facing life-threatening monsters was to be expected, after all – this was one of the reasons he had chosen this world. For a second, Storm considered to just give in; let the creature rip him to pieces and finally end his suffering, but – as always when he was about to take the easy way out – something in him rebelled, and in this particular moment, it was anger that rushed through him.

For once, he had been enjoying himself again; nothing more than a few minutes of clarity, a moment to appreciate the clear sky and the beautiful nature around him; a moment without his memories hanging over everything like a darkening cloud. But now, all that was gone, and with every additional breath, Storm lowered his heart rate; ready to make someone pay for taking that peacefulness away.

Focusing on the monster that was lurking in the shadows, he started to block out his surroundings. He knew that the forest ghoul had been sneaking around him and his cabin for days already; carefully and yet still voraciously the creature had been getting closer and closer, shielded by the forest’s vegetation, and thus almost invisible to the naked eye. It wasn’t until now though, that it seemed to be brave or maybe just desperate enough to consider an attack.

Storm put one hand on the grip of his sword and noticed how his senses sharpened. He was still a child when his powers awakened, when he felt the presence of one of the essences for the first time; it was nothing more than a dog that had been corrupted but what he felt was so terrifying that it still haunts him in his sleep sometimes. Nearly three decades later though, there was no chance that such an inferior creature could ambush him; unless he decided to just let it happen…

Despite the danger, Storm remained calm and didn’t move an inch while his muscles tightened. Little by little, the monster came closer, and Storm could feel how the tension in his body rose, how his powers warned him about the imminent threat.

Then finally, the forest ghoul attacked.

Followed by a dark and beastly roar – causing several animals in the vicinity to flee – the creature rushed out of the thicket and leapt at him. By now, Storm had given himself over entirely to his years of experience, and instead of thinking about his actions, he simply surrendered and let the motions happen.

A well-timed sidestep, and the monster flew past him.

Just like a dancer executing a pirouette, Storm gave his entire body to this turn, his sword whooshing through the air to complete the movement.

At the same time as he came to a halt, body and head of the forest ghoul separately hit the ground with a muffled sound. A pool of darkened blood started to spread around the dead creature, and the stench on the clearing increased, making it harder and harder to keep the nausea in check.

Storm pulled a dirty piece of cloth out of his pocket and wiped the blade clean. Once more, memories of the past tried to overwhelm him as his gaze was focused on the bloody ground. It took all his willpower to push the memories back, and as soon as he succeeded, Storm put his sword back into the sheath. He got down on one knee and took the head of the forest ghoul in both hands, holding it right in front of his face; its skin, basically nothing but bark, rubbed against his palms and fingers.

Carefully, he studied it: the sharp teeth, the long tongue hanging out of its mouth and the many twigs filled with leaves, growing everywhere out of its head; it was almost unbelievable that these creatures could move in the first place, that they actually lived – but whatever life this creature once had, it was gone now for sure.

How many lives this monster must have taken; it should have caused a feeling of relief to free the world from such an evil, but deep inside of him nothing had changed; a darkness – way more powerful than this creature – still had control over his heart, and so his pain remained.

Storm began to scream; it wasn’t very loud at first, but with every second he surrendered more of himself to the rage inside. His grip around the decapitated head tightened, and his screams became so loud that his throat began to hurt. Ignoring the pain, he kept screaming from the depths of his lungs, and threw the head as far as he could.

While the head was still in the air, Storm abruptly went silent, and with both eyes closed, he just stood there, heavily breathing.

He filled his lungs slowly and pushed the air out again; back and forth, back, and forth. The tension in his body declined with every single breath, and without paying any additional attention to the dead creature, Storm suddenly turned around and headed in the direction of his cabin…