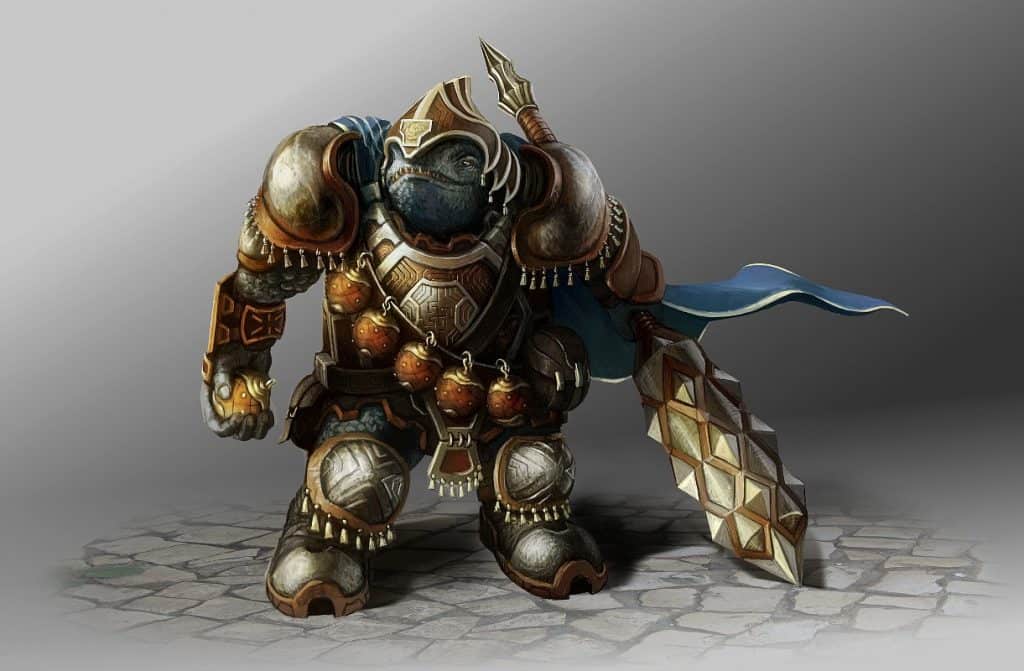 Sharing a lot of similarities with certain amphibian creatures in terms of their appearance, Rhultaks are an exceptionally unique race. For the majority of their existence, they kept to themselves on their origin world, Khorgram, living in a clan based society and battling an enemy that kept threatening their survival for thousands of years.

Many times the Dhari offered their help but the Rhultak never wanted to be indebted to someone else and so they rejected the offer, trying to keep their world a safe place on their own. It wasn’t until one of the darkest hours on Khorgram, a few centuries ago, that the Rhultak accepted the Dhari’s support at the brink of their demise. Together, they managed to push back the enemy and ushered one of the most peaceful times for the race the goddess Sisara once brought to life.

After the end of the Long Night and the influx of deadly creatures everywhere, a huge part of the population split and left Khorgram, convinced they were needed throughout the universe, called to pay back their debt to the Dhari by defending others in their absence. Those who stayed continued to follow the old traditions by listening to the guidance of their elders. As warring as Rhultaks might come across at times, disputes are often resolved peacefully if only involving members of their own; they do tend to engage in friendly banter quite often though which has resulted in many altercations with members of other races who weren’t able to understand it for what it was.

The majority of Rhultaks that left Khorgram did so in order to help make the universe — and subsequently their own world — a safer place again and so many of them became what some like to call purposeful mercenaries. While mercenaries of other races, especially the Humans and Gniwers, often can be hired for a variety of things, some more shady than others, Rhultak mercenaries only pledge their support to a cause they morally can get behind.

It wasn’t just their proficiency in combat that came as a blessing for the universe though when access to the Ether Portals could be restored; some of the most renowned armor- and weaponsmiths can be found on Khorgram and while they rarely engaged in trades with other races in the past, in the aftermath of the Long Night things changed and the legendary Rhultak smiths accepted orders from all around.

Rhultaks have always been a warrior-like race, but while they mostly had to face the dangers on Khorgram, they quickly adapted to the threats of other worlds, constantly improving their arsenal of weapons and strategies. They are especially known for their strength, endurance, discipline, exclusively plant based diet and the fact that they rarely ever go anywhere without wearing full armor; a necessity that to this day is ingrained in their society from fighting for survival for so long.

As the only self-fertilizing race, Rhultaks are able to produce offspring on their own, and as a result, they decide for themselves what kind of gender — a concept mainly known in other races — they associate with. The life span of a Rhultak rarely surpasses the age of sixty, but contrary to other races, they also mature much faster, resulting in full adulthood at the age of ten.