Where the Wild Men Die

Ragon — Epitome of Combat, Bane of Dishonor and Champion of Champions

The command echoed through the ranks of fresh soldiers, preparing for battle.The soft nickering of the Equos and the low growls of the Urds ready for slaughter mixed with the clunks of metal and the occasional whispered prayer to survive.

General Terahan overlooked his battalions from the ridge where he had stationed his command post, his back to his tent where his commanders were bickering on the best strategy. It was early morning and the sun was about to rise. He had marched his men through the evening so they could reach the edge of Garwan Forest under the cover of night.

Obviously it had worked. Before him through the morning fog, he could see the towering trees of Garwan Forest within his grasp. If he succeeded to enter the forest and destroy the Garwan forces he knew were gathered there, he would be able to immortalize himself with the swing of a sword.

“Signal the infantry to advance and send in the Urds as backup. Make sure they maintain their formations and that they protect the archers.” Terahan said in a loud voice, immediately silencing the arguing Humans behind him. Without moving from his vantage point he continued his instructions. Within moments, messenger girls ran down to his army down below and not long after, the sound of horns broke the serene quiet of early morning.

When the last strident sounds of the battle horns waned, an awakening seemed to happen in the forest, as if the trees themselves woke up and looked at them. Loud drums with a low thrumming sound started and when they reached a crescendo they stopped, followed by the piercing scream of a young woman.

After closely observing the treeline for a short while, Terahan raised a gloved hand and closed it into a fist. The frontline started to advance towards the treeline. After closing one third of the distance, a single male exited the forest. He was tall and even from this distance, Terahan could see that he was incredibly muscled. He stook out a hand and a servant dropped a looking iron in his hand. Setting it to the right distance, he looked at the male. Up close, he was even more impressive. Golden bands around his biceps and wrists seemingly straining to contain the raw power leaking from the man, shimmered in the sun. He wore a black velvet suit with red bands streaked across his armored skirt and had long golden hair that was black at the roots. As if he knew Terahan was watching him, he looked straight at him and winked, before he leapt towards the advancing frontline.

Terahan, a hardened warrior, had to look away and swallow to keep the bile down that started to burn in the back of his throat. With a huge smile on his face, the young man in black tore through Terahans troops as if he was a lion feasting on young doe’s. Ripping limbs, smashing skulls and crunching chests, he was soon drenched in blood and intestines.

After nobody was left, he wiped the blood off his face, pulled his hair back and sat down on a bent corpse. Still smiling as if daring the rest of Terahans forces to step in, he bellowed

“TERAHAN, IS THIS THE BEST YOU HAVE? ENTERTAIN ME AS YOU ONCE DID YOU OLD BASTARD!”

Shaking with rage and blind to any reason, Terahan demanded his sword. He did not know who this young man was and he could not deny the absolute power he just witnessed, but this was not the way his legacy should end. His commanders begged him to consider a retreat, to not let the man goad him in an obvious useless endeavour.

Cutting down his own in disgust, Terahan mounted his Equos and stormed downhill. The horns signaled the attack when the hornblowers saw their general entered the fray and amidst his army, Terahan barreled down towards his doom, blood rage consuming his soul; in the back of his head, the echo of the man’s taunting laughter.

Highup, through the leaves of the Garwan Forest, a group of its citizens watched the carnage. As they saw the golden man disappear in a flash of light, leaving behind nothing but silence, they thanked Ragon that they did not have to face this evil.

Little did they know that it was Ragon himself they had witnessed. 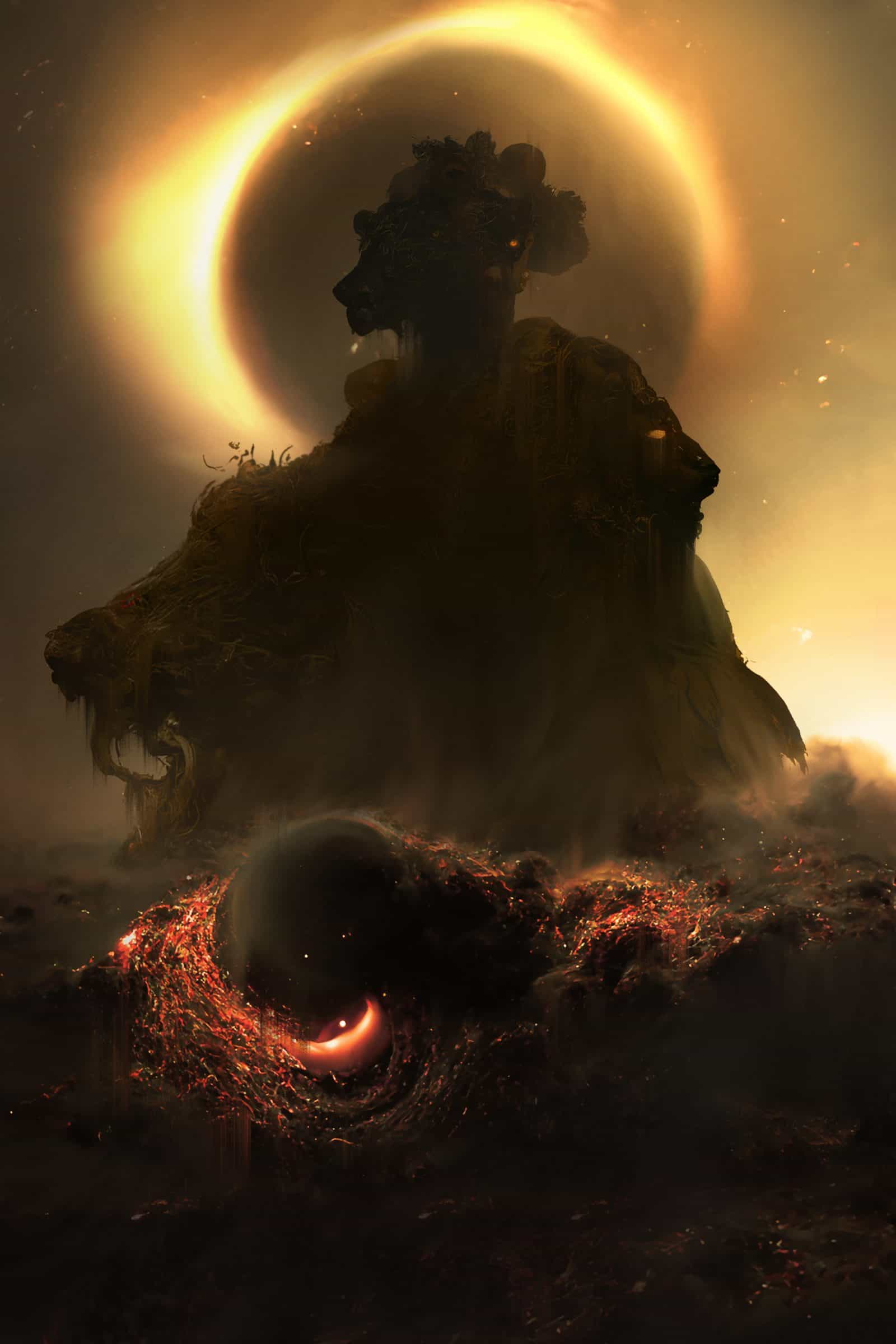