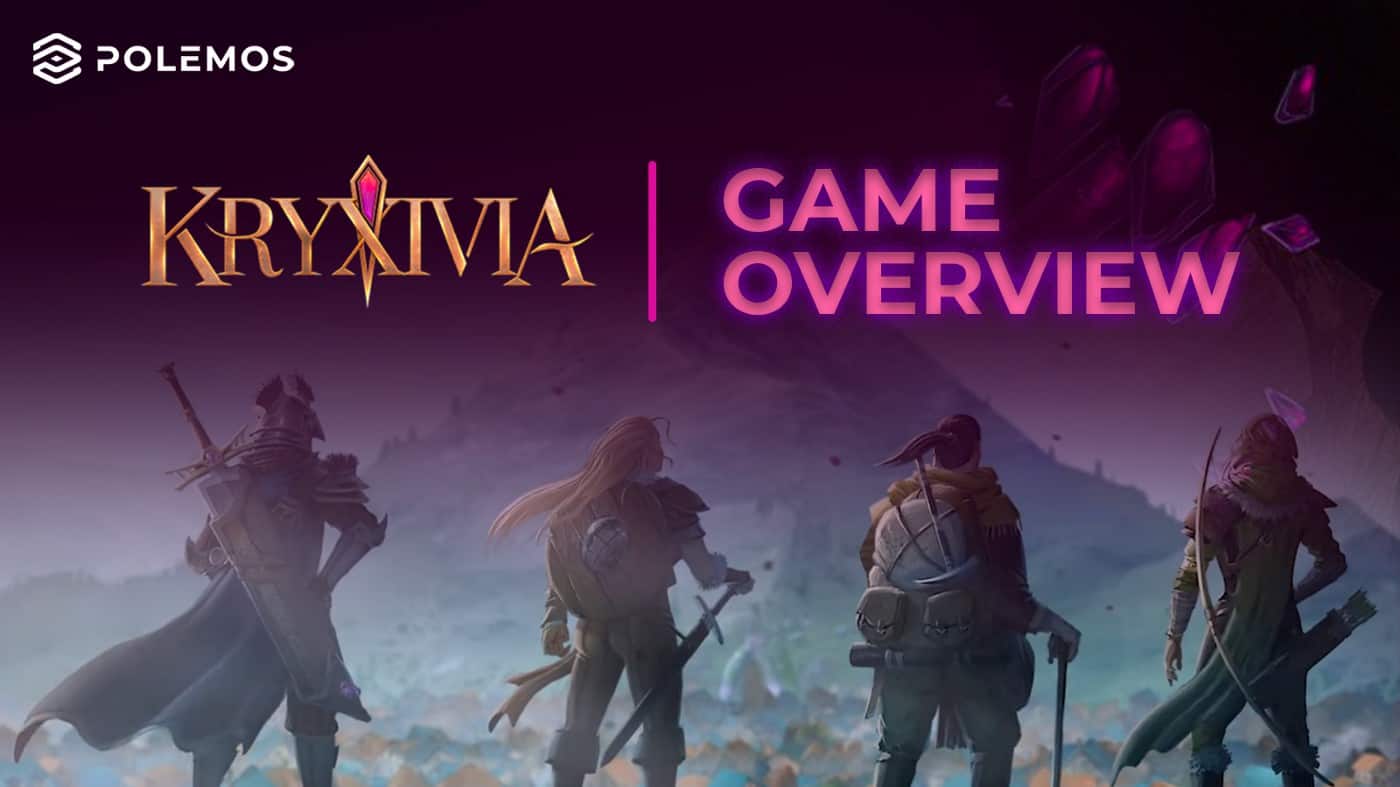 Adventure, riches, and danger await on the other side — muster the bravery to bust through. Kryxivia is the newest blockchain fantasy MMORPG to grace the GameFi Metaverse. The world of Kryxivia is overflowing with brilliant detail and high-octane battles. Our game overview will teach you everything you need to know about this epic play and earn experience.

Enter the city of Kryxivia, a vibrant town centered around a mysterious mine that leads to an ancient civilization filled with spell-yielding gems known as Kryxit. Sounds magical, doesn’t it? Of course, it is — but there is far more than meets the eye. Beware the monsters that prowl the mine, guarding the spell-casting gems for themselves.

The deeper into the mine you go, the better the gems and other items. As the loot improves, so does the strength of the creatures that stand in the way of your success. Bosses hoard the most powerful treasures, and their power only grows stronger with the greater number of players in the dungeon challenging them to battle.

Kryxivia City is your central game lobby and the inception of all opportunities. Here you will find NPCs to guide you on your journey, as well as meet fellow adventurers to form alliances to traverse the perils and wonders of the mine together.

The city is also home to a variety of important areas to prepare you for the exhilarating expedition ahead. Within the walls of Kryxivia City, you will find places to fortify your adventurer, such as a tavern to purchase consumables and an inn to rest your weary bones.

Money is another important factor in your Kryxivia success, so make sure to check out the auction house to buy and sell items between other players, as well as the e-bank to deposit items and money. The blacksmith can aid you with specific actions, such as linking Kryxit to your inventory items.

Then, take your skills and equipment to the training area before you put them to the real test down in the mines — the monsters that guard those precious gems have all the time in the world to sharpen their abilities to take you down.

Riches Await Within the Mine

When you feel ready, dive into the mine to claim your fortune. Enter the mine alone or with a team of up to 4 other adventurers.

The mine is filled with a seemingly endless amount of sparkling Kryxit, spilling out of every passage and room. Different types of Kryxit are defined by their color, indicating the type of spell that can be found in that area. Sounds peaceful enough, right? Wrong.

Much like The Cave of Wonders in Aladdin, the mine doesn’t appreciate your stirring, trying to steal its riches. The mine triggers an alarm to the monsters to prevent you from causing any havoc — but the havoc has just begun.

Defeating said monsters is the only way to get deeper into the mine. Eventually, after extensive battling, you will encounter a boss room — this Kryxit guardian will give you the fight of your life.

When you make it out of the boss room alive, you will be able to go deeper into the mine. The further you go, the more valuable and quality the Kryxit gems become, as well as items left behind by adventurers of the past.

An excellent rule to abide by is to never get too comfortable. Each defeated boss will give you a bit of a confidence boost, but eventually, you will encounter a threat that cannot be defeated by even the most formidable team of 4. This colossal guardian requires a raid party of at least 20 courageous souls. Be brave, dear adventurer — the reward is absolutely worth the risk.

Do with your character as you wish — in or out of the game, they are yours to keep. The ability to claim your character for free and export them from the game as an NFT eliminates the entry barriers of other games in the same MMORPG genre.

All characters start off as a blank canvas and can be returned to this stage, as no level or experience system is available. Instead, the mechanism used is a character slot system that allows the power of the character to increase or decrease back to zero based on what is attached to the character cosmetics.

Let the challenge of defeating these malicious creatures for gems and glory excite you — just make sure you are properly equipped. Items such as weapons, armor, and Kryxit gems are the ingredients for success in Kryxivia.

Items with gems attached are the real superpower in Kryxivia, as they produce a unique spell while equipped to the character. The monsters may be mighty, but they don’t stand a chance against a strategically-selected arsenal.