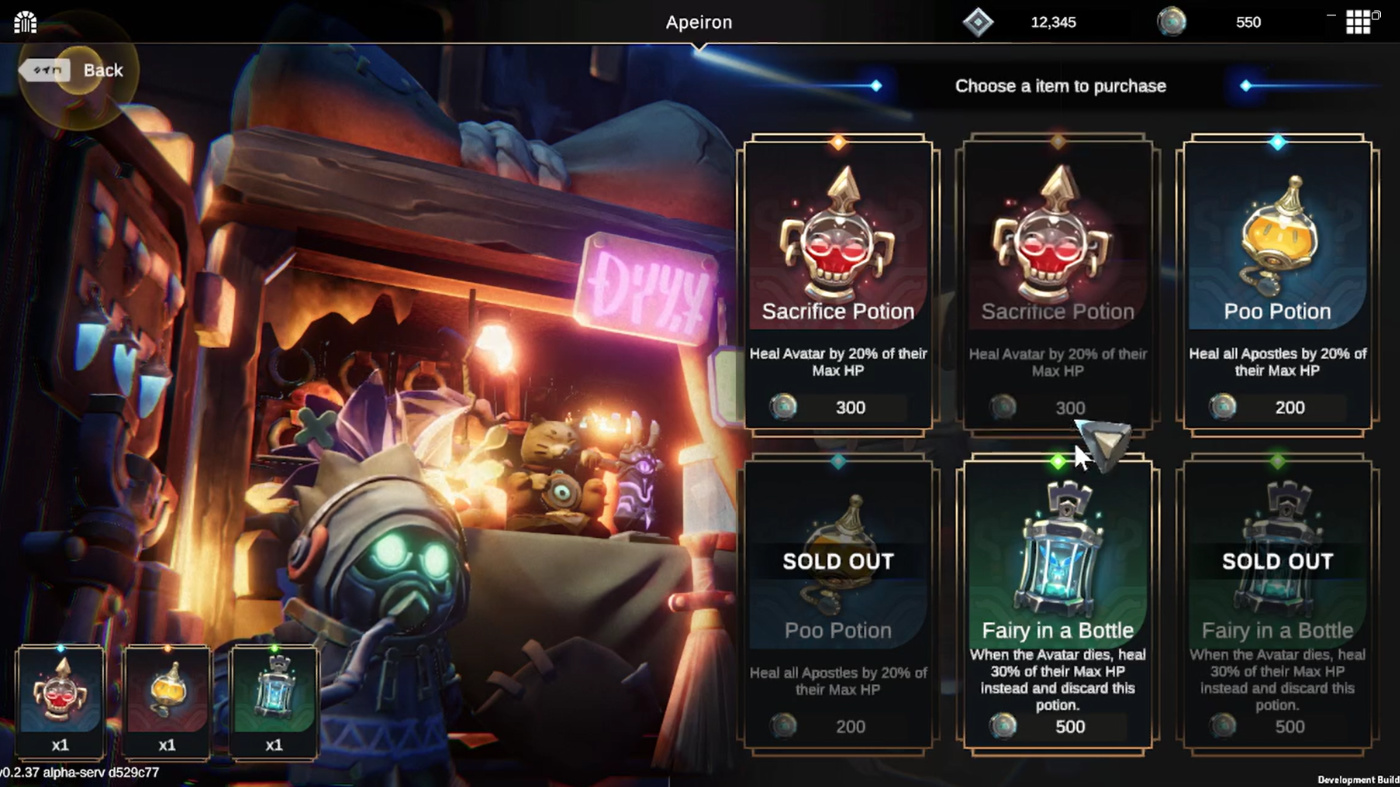 Cavan “Caveman” Roe samples the alpha release of Apeiron’s dungeon combat system, one of several modes under development in the Apeiron universe.

Apeiron’s new combat mode release is intense and fast-paced. The game, from Hong Kong studio Foonie Magus, has a unique gameplay that merges multiple combat systems. The strategic depth of this game has the potential to be wild.

Foonie has already hosted multiple sales of NFTs that will work throughout the Apeiron ecosystem, including planets, which are required to play the game and will act as your hero (known as avatars); apostles, the support units that will fight alongside your avatar; and stars, land NFTs that planets can orbit to gain bonuses.

The studio is taking a three-token approach to Apeiron, all on the polygon blockchain. The tokens are expected later this year.

Once players own a planet, they become godlings who attempt to control and manipulate their planet’s inhabitants, small sentient creatures known as Doods.

Doods pray to their gods for help with whatever basic elements they need to survive and develop their worlds. Divine help is dispatched in the form of miracles. The more Dood followers a god has, the more powerful their miracles.

When a planet’s Dood squad gets big enough, the player god can manifest as an avatar and it’s at this point that the RPG and rogue-like action-adventure game modes kick in, one of which is the dungeon combat system released this week in alpha.

I spent three hours in the play test. It was a proper demo that left me wanting more:

Beating the third and final floor of the alpha

The above video is footage from my final battle, and you will notice there’s a lot going on in this high-speed, fast-action combat once the round starts.

The mode combines auto-battler planning phases and card-game strategy, but also has a skill-based RTS/MOBA-like combat system as well – not to mention an RPG progression system throughout the dungeon crawl. This makes the game a unique and fresh addition to the GameFi space.

How does the dungeon crawl play out?

Players choose which rooms to explore and this decision determines whether they will fight a battle which will have normal or elite enemy wave types.

If you are successful you can earn some Foonie tokens or even apostles to replenish your ranks.

Losses result in you starting back at the beginning of the floor, however, you keep the experience you gained during your last attempt.

Your avatar and apostles will also gain experience through successful enemy waves, even if they died. This experience will result in boosted stats and skill points for your avatar.

The mode’s upgrade system is quite interesting. You have to make decisions between which skills you want to bring into battle (you can only carry three) as well as passive stat boosts.

All of the upgrades feel quite impactful if you use them properly, and are quite complex to the point where you can theory craft with the apostles you want to use in combination.

You can take a rest in the campfire rooms, where you have three options: heal your avatar and apostles, or revive a dead Apostle.

The fourth room to choose from is the shop where you can buy items to use strategically throughout the dungeon.

Right now there are three options to choose from and I always buy the Fairy in the Bottle if I can afford it. These do replenish after each shop room.

Once you make it to the end of the floor, your time is added to the leaderboard and you gain some bonus rewards.

I only came across two minor bugs (please fix the cursor!) and I would usually expect to find more in an alpha release, so this was a pleasant experience.

The game has solid potential and I can’t wait to test out the other classes and planetary types, but I have concerns about how Foonie will balance all the elements.

There are so many stats to consider in each of the abilities both for the avatar and the supporting apostles, with so many combinations – 15 planet types, three types of classes per planet type, 24 different skill cards, 24 different perks and 12 different apostles. That makes for a mind-boggling number of total possibilities (can someone please do the math for me?)

Either way, that means this game will need to be balanced with AI and I am very interested in how that will impact the value of the NFTs, which can range from hundreds to tens of thousands of USDC. This could give rise to a very healthy breeding industry, popping out specific combinations, and also will mean a huge field for competitive players to test out.