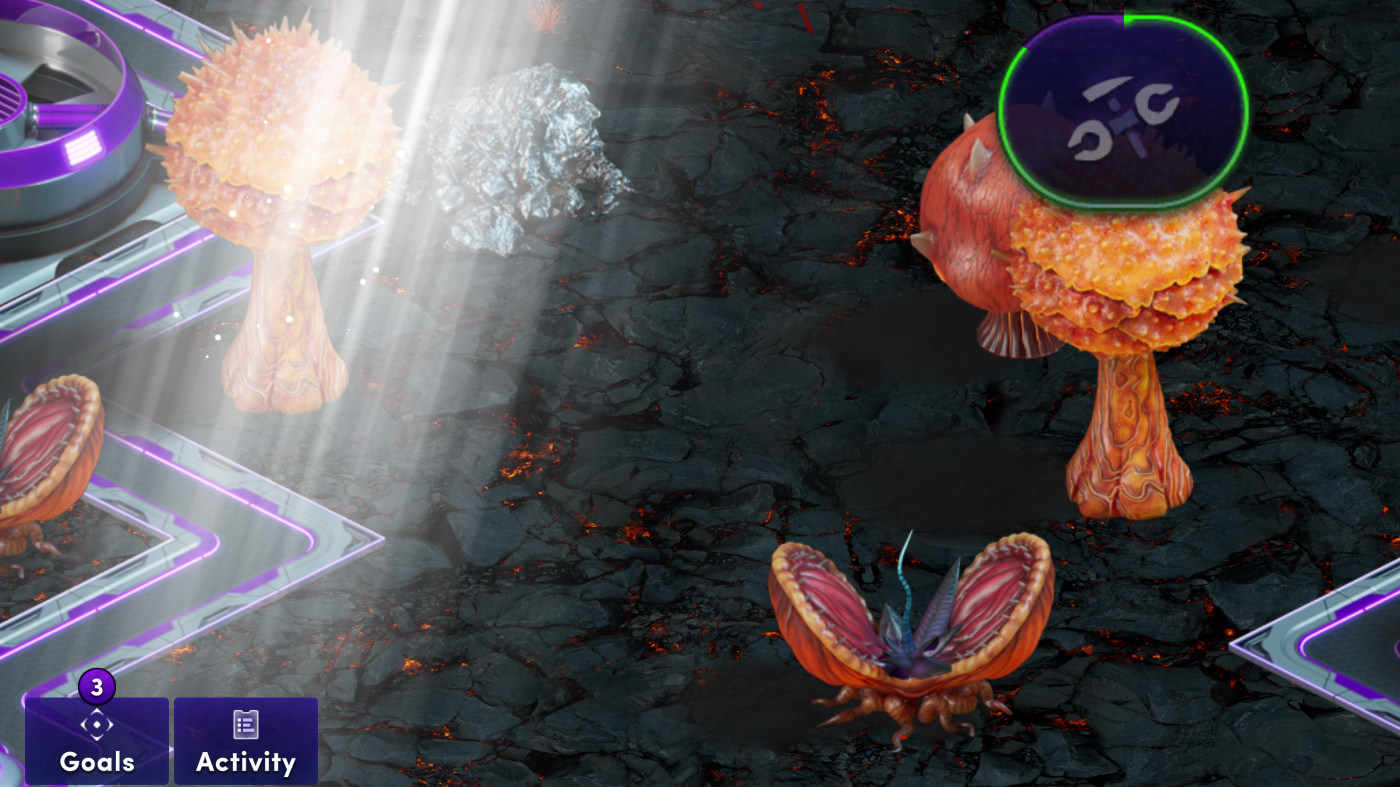 The alpha of city-builder Illuvium Zero, the third title in Illuvium’s “interoperable blockchain game” ecosystem, is out. After three days, Polemos’ Cavan Roe is already quite attached to his plot, driven to wake up at all hours to tend it and pleased to see the release rewards the most skilled, strategic players.

Illuvium Zero launched 14 minutes late on January 6 but no one seemed to care. The voice channel in Illuvium’s Discord was popping off, everyone spamming refresh to get the game download. The race was on to create the greatest Illuvium city. I spent three days building, upgrading, extracting, and below are the key things I learned.

But first, a few basics:

In Zero, players extract resources and develop unique skins (known as blueprints) by building industrial complexes and then optimising their output. These resources and blueprints can then be traded on a real market.

These different focus points for your plot of land are what is cool about Illuvium’s endgame. You could be a resource tycoon and sell fuel (resources will be required to travel, construct and more in the future) or you could be a skin-hunter, scanning for rare skins that players will also pay for.

Zero land can be one of seven unique ecosystems and there are five different-sized plots, known as tiers. The higher plots have substantial advantages in resource generation, storage, and overall potential for whatever goal a player wants to focus on.

You need to own land to play Zero alpha, but free-to-play plots will be available when the open beta launches down the line.

The other two titles in the Illuvium ecosystem are Illuvium Arena and Illuvium Overworld.

Eventually, players will be able to use the resources generated by their industrial complexes in Zero to give them an advantage in Overworld, which was recently released in beta. The fuel known as crypton allows you to travel within Overworld, hyperion allows you to construct shards, which are like Poke balls in Pokemon, and solon allows you to create weapons and equipment for your rangers.

At the beginning of Zero, you arrive on a desolate planet and have limited resources. There are no buildings and smart decisions must be made if you are to prosper. Building one extractor for each element – carbon, silicon and hydrogen – is a good place to begin.

If you absolutely ruin your start, you can always do an air drop from your nexus, but never do this unless you absolutely have to. You will waste a full 24 hours waiting to get very few resources.

If you ever accidentally start an air drop – or anything that you don’t want to do – you can hit cancel in the activities menu at the bottom right of your screen. Cancelling does not give you all your resources, but in most cases you can make the required resource back fairly quick.

At the beginning it can also be a little difficult to know which resources are which. I would suggest toggling the resource option in the bottom right of the screen. Then you can see what the node will provide above it.

Zooming in can be useful in the construction of paths, which will make building, upgrading and extracting quicker.

Paths are also free in this alpha and I would advise adding them around all your buildings, and even pre-laying them around plot locations, as depicted in the image below:

Each side of the building with a complete path, including corners, will grant you a time reduction, with diminishing returns. The paths do not need to be connected to the nexus or anything else, they just surround the building.

There will be times where you won’t want a building to be completely surrounded by paths.

Converters are one such building. They become more efficient if they are next to the source they are converting.

In the image above, I have a hydrogen converter next to a lake, from which I am extracting hydrogen. If I had placed a road between these two buildings, the extraction rate would have dipped by 4%.

If you have efficiency toggled in the “Show Menu”, you can move buildings to see how they are impacted by adjacent buildings. This will allow you to maximise the performance of your plot.

This is the most interesting aspect of the game. Trying to shape a city in the perfect way is something that I have spent hours on, re-planning and trying to min/max every building.

Illuvium has made a game that will reward those who spend time figuring out the perfect placements and I appreciate it when studios reward the most skilled, strategic players in a game.

There are a few other things you need to watch out for.

In the image above, you will see two of my buildings are way in the red at only 54% and 61% efficient. The buildings are converters that create crypton from other fuels. They have to be placed very particularly in order to be optimal.

This is difficult to maximise but makes the game balanced because these converters are extremely useful. They extract more than the base extractors. I would strongly recommend building these, but in moderation and depending on your land. If your resources are spread out all over the map, this is great for you. But if they are condensed, you will have to pick and choose which ones you want the most.

The other way to improve your buildings is with power stations. In the image below I added one more power station. These increase the efficiency of nearby buildings.

You will notice my two converters are now at 61% and 71%, a solid gain that will hopefully correct my initial mistake, but there is a cap on how many buildings you can have.

Nexus level is the most important aspect of the game. You need it to make more buildings, which both hold resources and extract resources.

In the image below, you can see I’m stuck at 20/20 buildings and need to upgrade nexus to build more.

The game then becomes more routine: you upgrade nexus, build until you hit your cap, fill up your storage and wait for fuel.

Fuel is the choke point in this game. It is the rarest resource and takes 24 hours to harvest without roads. This is necessary for all the high-level buildings. It creates a 24-hour wait – 17 hours if surrounded by roads.

While waiting, you just upgrade any buildings that don’t require fuel, which is mostly the storage buildings.

Storage is key. You will want 3-4 of each resource storage type to make it to the fuel stage of the game in good shape.

You need massive supplies to make the buildings in the late game and you can check your capacity by clicking on the resource icons at the top of your screen.

To limit any abuse of the economy between Zero and the other Illuvium titles, you can speed up everything but fuel. This makes the game more “pay for convenience” than “pay to win”, as is the case many other city-building games.

Speed-ups are known as credits and are shown by the gold icons in the top right.

Credits can also be collected periodically through accomplishing goals, and by clearing the local flora (alien trees and plants).

Credits are a limited resource, so I would use them sparingly and only on tasks that are more than one hour long. The marketplace is not live yet, so even if you wanted to spend money to speed up development, once you are out of credits, you will have to wait.

You can get a bonus reduction of up to 59 minutes if the total build time is less than two hours. For example, in an 8-hour build, you could spend 8 credits to finish the building all at once, or you could wait 6 hours, and then 1 minute and 1 credit would finish off the rest of the build. This approach will maximize your limited credit supply.

After three days’ play, I can see a clear gameplay loop in Zero, with quality strategic components that make the game interesting and fun, but I feel like it will be a while before I get to the late game.

One thing to plan for is the singularity scanner, the building in the bottom left corner of the image below.

This building is one of the most exciting. It allows you to capture illuvial data, which can then be used to create in-game skins. It is quite a complex building, however, as it only reaches peak efficiency when completely separated from the city.

The only thing I found quite frustrating was not being able to see my whole plot as you can’t zoom out very far. This is frustrating for many players. We want to be able to see the whole plot and it can feel restrictive not being able to zoom out or add an icon on the side of the screen that shows your resource is ready to extract. This would prevent the constant scrolling back and forth.

There are also a few bugs that can set you back quite a bit, but that’s obviously to be expected with an alpha. If you are struggling with a bug, feel free to jump into the bug reports channel in the Illuvium Discord and they will get you sorted or pop into the Illuvium voice chat, where many of the community will gladly help. Feel free to tag me and I’ll try to help where I can.