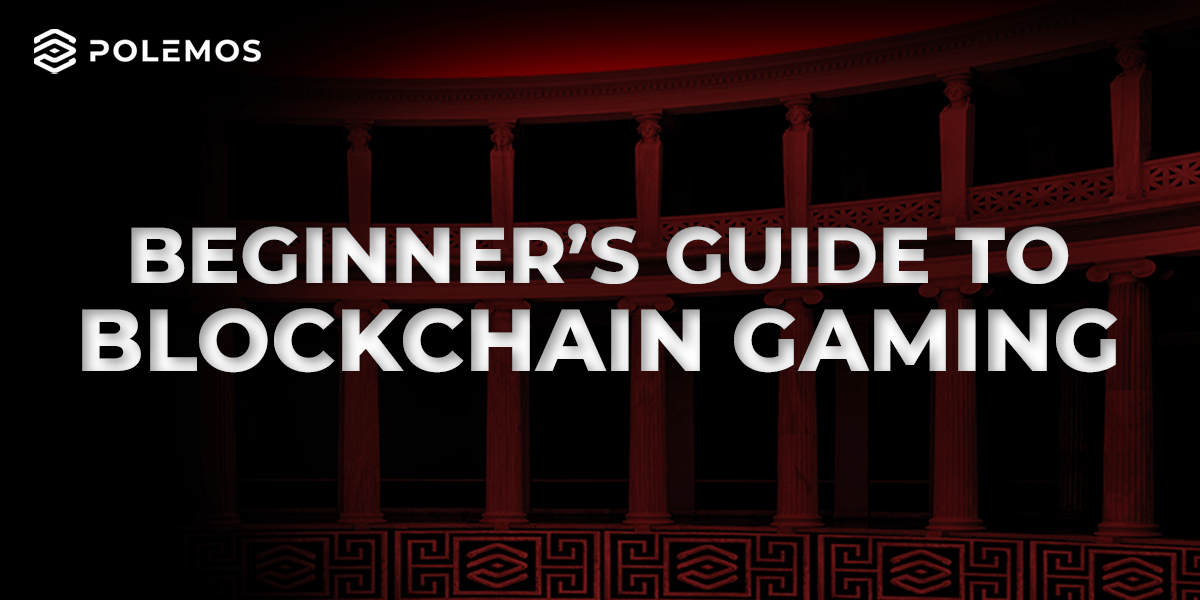 Welcome To The Beginner’s Guide to Blockchain Gaming By Polemos

This beginner’s guide to blockchain gaming will teach you everything you need to know to start playing on the blockchain. No prior knowledge is required!

This guide will mention blockchain many times, so for understanding, a blockchain is a ledger of transactions. Contrary to popular belief, these transactions are not necessarily monetary. Anything exchanging an item or value from one site to another is considered a transaction. For example, you could record the transfer of a profile picture on the blockchain from A to B.

The blockchain is not Bitcoin, Ethereum, or Polkadot. All these are blockchains, but they don’t represent the term as a whole; just like Facebook isn’t the internet, and Wikipedia isn’t the encyclopedia. They’re all “forms” of the underlying technology.

The underlying technology of the blockchain is a gigantic, peer-to-peer ledger. Imagine this ledger as a paper saved in thousands of cases worldwide. Everyone can edit this piece of paper, but it will only work if most of the thousands of connected machines agree it is a worthy and reputable edit.

Blockchain technology democratizes how computers interact with each other and vote for each new transaction. It’s incredibly effective against malicious attackers, preventing most blockchains from being penetrated in the last decade. Unfortunately, the same isn’t true for many popular web2 platforms—including banks.

Now that we know the basics let’s dive deeper into blockchain gaming.

What is a Blockchain Game?

A blockchain game is any game that interacts with the blockchain, whether it is to record marketplace transactions or victories inside an arena. For example, on Fortnite, these would be victories in the Battle Royale.

Blockchain games are getting popular due to the potential yield and in-game asset ownership offered to players. Most games feature in-game tokenomics, allowing players to own items, resell them on the open marketplace, and potentially profit from game activities.

It is crucial to understand that blockchain gaming is not one specific game but represents a particular set of gameplay rules. For example, blockchain gaming is unlike “MOBA” or “RPG.” With this new paradigm for gaming, we’re building an entirely new market, not a new genre.

Blockchain gaming can include MOBAs, First-Person Shooters, RPG fantasy worlds, Sci-Fi managerial games, and much more. Most genres already have a counterpart in the blockchain world. For example, Skyweaver is very similar to Hearthstone.

A blockchain game usually includes managing and owning items, exchanging properties on the internal and open market, and decentralizing rewards (e.g., through a token or coin).

The underlying philosophy behind anything blockchain-related is that you should own whatever you buy and share with the world.

Traditional gaming doesn’t allow players to own anything. Although you might conquer a sword or unleash it from your sheath, the blade will never be yours. It’s simply a 3D model you can use.

In blockchain games, players fully own whatever they have as “owned assets.” Owning your assets means you can trade them on external marketplaces, store them to accrue value, or even sell them for other items. The same sword in a blockchain clone of WoW is yours.

Owning a sword in a WoW clone also has the potential to lead to private events, in-game items in partner titles or studios, and communities on Discord or other social platforms. Owning something usually brings additional benefits.

Ownership is also a tangible thing you can sell at any point due to your status. For example, owning a house means far more than just existing within the four walls. It offers the potential to keep, remodel, or sell for profit because it’s something you own.

Blockchain games usually allow you to own assets through NFTs—tokens on the blockchain. NFTs are snippets of information stored on the blockchain and function similarly to a token or coin. The primary purpose of an NFT is to assign ownership to the player in the game.

For example, your NFT might be a random string of code showing your name and redirecting the sword code inside the game instead of using the actual sword code. If the NFT contained the existing code, the sword couldn’t be used in any other game!

By storing the ID and proof of ownership only, the NFT allows the owner to trade it for any use the buyer might want or even stake it. For example, another game could say anyone with a particular NFT gets a benefit or a sword inside their title. They can do that because they can link the sword’s codebase with the NFT object ID.

Without going into technical details, storing actual code inside an NFT would be very expensive and inconvenient for the end users.

Are all games using a proprietary token?

No. More and more games are moving away from trying to design complex tokenomics and are using stablecoins (such as USDC or USDT) or creating tokens for the sole purpose of redistributing revenue—like stocks.

How Can I Start Gaming on the Blockchain?

To play inside a blockchain game, you will need a web3 wallet and usually some tokens to pay for gas fees.

Other than the token, you will need a blockchain wallet. We like “Hot Wallets” like Enjin or Metamask. Both work great.

These wallets are free software applications that keep your funds online for ease of use, also known as hot wallets. To learn more about the different types of wallets, click here.

Once you have your wallet, choose the best game to suit your taste and start playing!

What are Some Games I Can Play on the Blockchain?

Tryhards, Kryxivia, Illuvium, Skyweaver, Blankos Block Party, God’s Unchained, and Splinterlands are free games you can play on the blockchain.

Many games included in this list are partners of Polemos. We can help get you on the road to earning with the assistance of our game experts and comprehensive overviews. You can check out all our partner games here.

Suppose you want to start playing games that are outside our partner list. In that case, you can check a complete, actively updated list of dApps (decentralized applications) in the gaming space on dApp Radar.

dApp Radar monitors the game through blockchain lenses. This lens means you can see the total number of players, the volume of transactions, and many more details to pique your interest in a particular game.

Starting Web3 Gaming Can Be Expensive

Beginning your adventure in blockchain gaming can be expensive. New titles and AAA studios often require players to purchase an initial set of NFTs to start playing.

The initial set of NFTs can cost up to $1,000—not a sum that isn’t comfortable for most people.

The good news is that GameFi platforms, such as Polemos, have Scholarship models. A Scholarship allows you to rent NFTs for a small portion of your in-game yield. You can learn more about Polemos Artisans here.

Repaying your “debt” through in-game yield is a fail-proof and free strategy to get your feet wet and start learning about many different games without investing in any of them.

Polemos has a significant number of gaming and blockchain experts within our community. Our top esports players, engineers, marketers, and tech leads can help you set up your profiles safely and securely.

This beginner’s guide has given you a solid jumping-off point to start your blockchain gaming journey—but it doesn’t stop here. Ask questions, grow together in our interactive community, and check out our other guides!

We wish you the best of luck getting involved in your favorite blockchain games and hope to be with you in the next realm of web3 gaming!